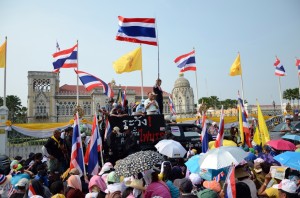 Thailand’s opposition Democrat Party, as well as the supporting People’s Democratic Reform Committee (PDRC) protest movement, will weaken due to strategic missteps of boycotting elections and attempting to block other parties from registering with Thailand’s electoral commission. It should be obvious that elections and elected position are a potent source of influence for both political parties and social movements. Boycotting elections invariably backfires as a strategy because it increases distance between the challenger who wields the strategy, and the electoral source of influence. Election boycotts led to landslide victories for incumbents in Trinidad and Tobago (1971), Jamaica (1983), Burkina Faso (1991), Ghana (1992), Togo (1993), Ethiopia (1994), Mali (1997), Algeria (1999), Gambia (2002), Guinea (2003), Azerbaijan (2003), Iraq (2005) and Venezuela (2005). The incumbent also won the boycotted 3 April 2006 elections in Thailand. These were later invalidated and followed by a coup, resulting in the instability that continues in Thailand today. As in prior boycotts, expect the incumbent political party, in this case Prime Minister Shinawatra’s Pheu Thai, to take advantage of the challenger’s absence to consolidate the Pheu Thai’s parliamentary majority and public image. Expect increased dissatisfaction among the opposition and military, and resulting political instability.[1. Horowitz, Donald. Ethnic Groups in Conflict. Berkeley, CA: University of California Press, 1985, p. 327; New York Times, “Jamaica election boycott,” 11/29/1983.; Frankel, Matthew. “Threaten but participate: why election boycotts are a bad idea.” Brookings Policy Paper #19, March 2010. Washington, DC: Brookings Institute.]

Boycotting elections may provide short-term media and international attention, and satisfaction to followers who perceive themselves as blocked from a fair electoral process. The strategy is used when a party perceives corruption and repression blocking electoral success. Factions within the opposition obtain gains among their supporters with strong calls for extreme and divisive measures. Increased international attention can persuade the ruling incumbent to decrease electoral corruption. In the case of Thailand, the opposition may be hoping that the boycott will increase protests and potentially cause a coup, as occurred in 2006.

While the boycotts may be in the interests of certain leaders and factions within the opposition, they lead to major disadvantages suffered by the movement as a whole. In addition to the disadvantages listed above, election boycotts show the opposition in a negative light to outsiders, including swing voters, international election observers and diplomats.  The incumbent need not resort to damaging tactics such as election rigging during a boycott, as they can win by simply mobilizing supporters to vote. Political parties that boycott elections appear to many outsiders as exhibiting an indolent lack of effort. The question arises as to whether the opposition party members are unpopular and cannot win a fair election, seeking rather to mask their weakness with a boycott that avoids the embarrassment of electoral defeat. The strategy is inherently undemocratic, and so will be unappealing to many who value the democratic process. Seeking to block the registration of other parties through street protests, as executed this month in Thailand by the Democratic Party and its protest movement, appears thuggish, hypocritical and undemocratic, and cannot help the image of the movement or the associated challenger electoral party. Given that many in the opposition movement and party disagree with the boycott strategy, it will likely divide and weaken the opposition, even among their followers. To the extent that the movement perpetuates and increases its status as an outsider, and portrays the democratic process as illegitimate, a small minority of individuals within the opposition will increasingly turn to violence, terrorism, and other divisive political strategies. A replay of the 2006 coup could occur. None of these events improve the stability, livability, or investment environment of Thailand.

The decision to pursue an election boycott was a mistake on the part of the Democratic Party and the PDRC. It will seriously weaken the  opposition over the next decade or more. Only if the boycott were part of a larger strategy for gaining influence, such as a last-minute reversal of the boycott, or the sequence of events in 2006, might it lead to gains for the challenger. Regardless of the electoral outcome, however, instability will increase in Thailand.

Anders Corr, Ph.D., is Senior Editor of the Journal of Political Risk.