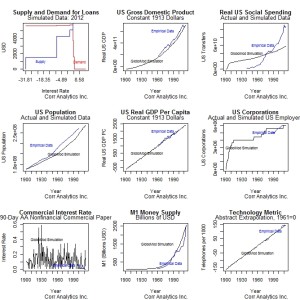 GloboMod is an agent-based model (ABM) of the macroeconomic system produced by Corr Analytics to predict, determine and test optimal macroeconomic policy and investment strategy. GloboMod is the first agent-based model that analyzes the financial sector by building it from the granular level of households. This allows modeling of individual investor effects such as crowding, speculation, and bank runs. It is the first to use genetic evolution in the context of a macroeconomic model to eliminate bankrupt corporate agents and reproduce corporate agents with winning strategies.

GloboMod is under development, and is building towards accounting for politics, including partisan votes on taxes, politicians that compete for voters by implementing tax and regulatory change, jurisdictions with different tax and regulatory strategies, and investor choice between jurisdictions. GloboMod is implemented with agents having bounded rationality and asymmetric information, and is verified against empirical data. The simulation uses the object-oriented R statistical programming language.