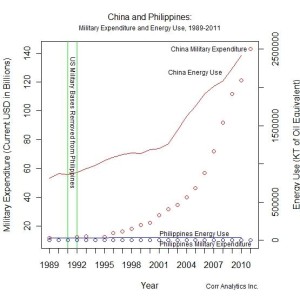 The Philippine government is constitutionally required to craft an independent foreign policy, but it must accelerate cooperation with foreign powers to do so effectively.  China’s growing militarization and energy consumption are fast out-pacing the meager military spending and energy consumption of the Philippines (See Figure 1). This makes China, more so than the Philippines, willing to risk military conflict over disputed energy resources, fishing areas, and transportation routes in the South China Sea. END_OF_DOCUMENT_TOKEN_TO_BE_REPLACED

Today North Korea put their medium-range missiles on combat alert and repeated threats against US military bases including in South Korea, Guam, and Hawaii. The US Defense Department sent a strong signal by flying two nuclear-capable B-2 Stealth Bombers over South Korea in training exercises, and through comments to the press by the Defense Secretary that indicate a readiness for conflict should that be necessary. A Defense Department spokesman softened those comments by reiterated that the US seeks to deescalate tensions, and that the important goal is to stay ahead of North Korea in terms of its capability to marry a nuclear warhead with a missile delivery vehicle (CNN). However, a potentially greater threat from North Korea is an unconventional or terrorist delivery of nuclear or other weapons of mass destruction (WMD). Were a nuclear device to explode in a major port city, for example, it would likely cause up to one trillion dollars of damages, 500,000 deaths, and $40-70 billion in trade losses  (Bloomberg. Congressional Research Service).

It is unlikely that the North Koreans would follow-through on their most recent threats, and unlikely that were they to try, a missile strike would be effective. The North Koreans are having difficulty with the technical challenges of component miniaturization that would allow them to place a nuclear warhead on a missile. To stave off such an attack in the future, the US must nevertheless maintain robust intelligence, deterrent, and preemptive strike capabilities. North Korea could provide us with an unpleasant surprise. Saddam Hussein surprised the world in 1990 with the progress he had made towards achieving nuclear status, and there is much more technological improvement in rogue state nuclear capabilities twenty years later.

China and Russia are likely sharing, to a limited extent, nuclear technologies with Pakistan, Iran, and North Korea. These rogue states are likely sharing with each other as well. This sharing does not necessarily have to be state-sanctioned. A poorly-supervised agency within a rogue state would have the capability to proliferate nuclear or other WMD technologies without the knowledge of its government. Many individual scientists or government officials in these corrupt countries, if offered sufficient incentive, would likely be willing to share technological expertise or hardware necessary for the making of blueprints or reverse-engineering.

The risk is not only that North Korea has a nuclear delivery capability about which we are unaware, but that they could be considering unconventional approaches to delivery. These approaches could include smuggling a nuclear weapon into the United States, Japan, or South Korea. Radiation detection used on all containerized cargo coming into the United States does not effectively detect nuclear materials encased in lead. X-ray scanning, which might detect such encased materials, is only used on 4% of the highest-risk cargo inbound to the United States. The Department of Homeland Security has found it impractical to implement a 2007 Congressional mandate to scan 100% of incoming containerized cargo  (Bloomberg). Implementation of scanning and detection technologies is currently insufficient to guard against nuclear terrorists or rogue states that use containerized cargo as a delivery vehicle.

North Korea could also simply drive nuclear materials and components across the Canadian or Mexican borders, or smuggle them on fast boats from a nearby Latin American country. Such components can be reassembled once in the United States.

Finally, North Korea is in a unique position to use biological weapons of mass destruction. Often referred to as a hermit kingdom, North Korea has the world’s strictest restrictions on immigration and emigration. This makes them relatively invulnerable to blowback from a biological WMD. The most dangerous biological weapons are highly contagious. Contagion through humans is the delivery vehicle. Thus a strong disincentive for use of biological weapons by non-secluded states is the danger that the contagion will spread to one’s own country. This applies to a much lesser degree for North Korea. Biological weapons have the advantage over nuclear weapons in that they cannot be detected by radiation detectors or x-ray scanners, can be produced by small teams of bio-chemists with relatively ordinary lab equipment, and would be easily smuggled in containerized cargo. North Korea certainly has the capability to construct such weapons, and Defense Secretary Rumsfeld’s “unknown unknowns” applies. Finally, unconventional delivery of WMD has the advantage over missile delivery for North Korea in that its origin is less traceable.

The United States came close to a preemptive strike against North Korean nuclear capabilities in the 1990s. While there are certainly risks of retaliation against regional US bases and allies, such a strike is still on the table as a policy option. It could have a salutary demonstration effect for other rogue states and proliferators, including Iran and Pakistan. The option of waiting, and continued technological development by a belligerant and immature North Korea, could make it impossible to take such actions in the future.

Saber-rattling by China over the Senkaku Islands, most recently in the form of locking weapons on a Japanese ship and helicopter, have led some analysts to warn of war between the two East Asian countries. These analysts go further to question whether the US treaty commitment to Japan’s territorial integrity would hold in this case (Wall Street Journal).

Such warnings are overblown. Militarized jostling of this sort is normal for low-intensity territorial disputes. All parties — including China — recognize that war would be counterproductive. China regularly activates media coverage with its mildly belligerent actions in order to bolster and maintain its long-term claim to the islands should the case go to an international court in future. Japan is a key US ally and trading partner. There is no question that were war to occur between China and Japan, the United States would defend its ally.