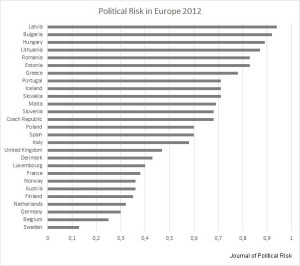 This paper proposes a quantitative index of political risk in Europe, based for the first time on corruption, market distortion, and the shadow economy. It is constructed upon the idea that within a continuum between rule of law and corruption, the levels of political risk vary greatly. Institutional statistical data are used to allow for reliability in time and cross-country comparison. As a proof of reliability, the resulting scores are highly correlated with other applied indices of political risk. A major advantage of the proposed index, however, is that it differentiates between developed countries, which is not possible with existing risk indices. END_OF_DOCUMENT_TOKEN_TO_BE_REPLACED