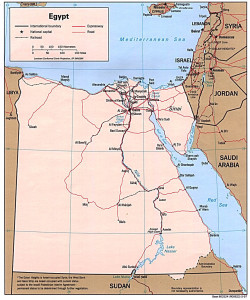 Egypt is on the verge of being engulfed by a long-term insurgency. After a brief period of democratization following the Arab Spring, the world’s most populous Arab country has returned to a popular military dictatorship. General Sisi will likely lead the country, either as power behind the President, or as President himself. The primary difference between the Egypt of Sisi and the Egypt of the pre-Arab-Spring Mubarak will be a function of the overthrow of the democratic Islamism of President Morsi. A new outraged minority with pro-democracy and pro-Islamist beliefs fielded popular protests, and was repressed with lethal force. A significant minority of that minority will now divert their energy towards terrorism and organized insurgency. END_OF_DOCUMENT_TOKEN_TO_BE_REPLACED 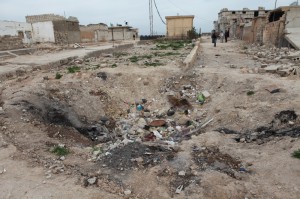 The US and NATO could be pursuing a strategy of adding fuel to the fire in Syria. The Government of Syria has been allied with Iran, and irritated the US and NATO from a nonproliferation perspective, for a long time. The US has consequently wanted to destabilize the Syrian Government. Now, that wish has been met. The Syrian Government is in a counterinsurgency against rebels that are closely allied with Al Qaeda. Other than humanitarian considerations, the US and NATO should be quietly overjoyed that two enemies are fighting. END_OF_DOCUMENT_TOKEN_TO_BE_REPLACED

By Anders Corr, Ph.D. On Sunday and Monday in Dhaka and Chittagong, Bangladesh, from 70,000 to 200,000 Islamist protesters called for adoption of Islamic law (Sharia) by the secular government. The government responded with force to related road blockages, violent riots, and primitive thrown explosives. The government use of force included some live fire, and a total of approximately 37 killed over two days. That number will likely rise, and thrice that number were likely wounded. The largest opposition party, which is allied with the Islamists, called for a 2-day general strike (WSJ, NYT, CNN, WP, AJ). Footage of the protests is below, courtesy of Associated Press.

The effects of such force will be to increase the number and militancy of islamists in Bangladesh. A minority will likely turn to more subversive violence, such as terrorist assassinations, extortion, and bombings. Such action and reaction by the government and protesters has no obvious resolution in sight. Combined with Islamist anger at continuing legal proceedings against prominent Islamist politicians and public anger at mounting factory deaths, the last two days is likely a turning point for Bangladesh’s stability — in a decidedly negative direction. At least some of this increasing unrest may soon target foreign visitors, investments, and suppliers in the country.