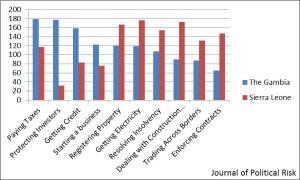 Political risk in the tiny West African state of “The Gambia” is high.  Named after the small river around which its borders fluctuate, the country hosts a dictatorship established in a 1994 coup. The country also hosts Hizbollah operatives who conduct international financial transactions, and is one of the top African cocaine transshipment points to Europe. Local businesses are considering fleeing to Sierra Leone to escape a raft of seemingly arbitrary and protectionist laws promulgated by the President for potentially personal reasons. END_OF_DOCUMENT_TOKEN_TO_BE_REPLACED 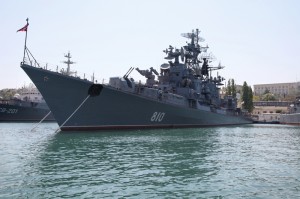 Russian actions with respect to Syria complicate the war from a primarily internal issue, to one over international influence between aspirant global and regional hegemons. Because the weapons delivery could be seen to counter Western military actions in the region, they have already increased US congressional criticism of Russia. Such criticism will likely increase in future, especially if the weapons are used against Western assets. This strategic offense to Western military commanders will lead them to more strongly support military options. Ironically, the Russian action increases pressure on Western political leaders to order intervention. END_OF_DOCUMENT_TOKEN_TO_BE_REPLACED

The US and NATO could be pursuing a strategy of adding fuel to the fire in Syria. The Government of Syria has been allied with Iran, and irritated the US and NATO from a nonproliferation perspective, for a long time. The US has consequently wanted to destabilize the Syrian Government. Now, that wish has been met. The Syrian Government is in a counterinsurgency against rebels that are closely allied with Al Qaeda. Other than humanitarian considerations, the US and NATO should be quietly overjoyed that two enemies are fighting. END_OF_DOCUMENT_TOKEN_TO_BE_REPLACED 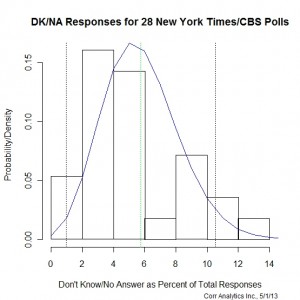 While the wording of the poll question on North Korea was acceptable, the question on Syria was ambiguous due to usage of the word “responsibility” and the phrase “do something”. It would be very possible to think that the US has no responsibility to act in Syria, but should do something nonetheless. It is also possible to think that the U.S. has a responsibility to do something, but should nevertheless refrain from acting. Finally, “doing something” is ambiguous, and does not necessarily mean “intervention” as asserted in the reporting of the poll by the New York Times. The biases are countervailing, and lead to ambiguity. END_OF_DOCUMENT_TOKEN_TO_BE_REPLACED

Such measures might remove a bit of pressure from rebels and provide a public opinion boost to current participating governments in the US, France, and Britain, in that voting publics in those countries would feel that their governments were doing something positive to end the Syrian crisis. However, due to the limited nature of the proposed military measures, they would not alter the balance of forces on any side of the complex conflict and could lead to notable negative consequences. END_OF_DOCUMENT_TOKEN_TO_BE_REPLACED

On March 15, 2011, popular protests erupted in Syria as part of the Arab Spring. The Syrian regime brutally suppressed the protests, which grew into armed opposition and civil war. President Bashar Hafez al-Assad’s Ba’athist government fought against a splintered but militant opposition. The United Nations tracked atrocities committed on both sides, including more than 70,000 killed (CNN).

Assad obtains most of his political support from the authoritarian regimes in China, Russia, and Iran. The Arab League previously supported him, but as the atrocities mounted, now supports the opposition. There is substantial public support for action against the Syrian regime in the United States, France and Britain. The types of action palatable to the voting public in the United States and Britain, weary of wars in Iraq and Afghanistan, do not include intervention. The public in newly-interventionist France does support deploying United Nations troops to Syria. All three countries support economic sanctions, and there is increasing support for supplying opposition groups with military materiel  (Council on Foreign Relations). Political leadership in the United States, France and Britain are responding with proxy war proposals consistent with this public opinion.

Expect limited military materiel support to Syrian rebels from the US, Britain and France in the near future. Due to insufficient public support, this will not include deployment of troops, and will only be sufficient to prolong — not win — the war. Over time, limited and therefore ineffectual military support may lead to increasing public support for deployment. If deployment occurs, expect a quick apparent win by the opposition, which turns into a long (5-15 years) and expensive period of nation-building and civil war as in Iraq and Afghanistan. Increased western military expenditures will improve yields in the defense sector, but increase government debt and taxes. Expect lower economic performance overall as defense expenditures aimed at Syria increase.

Thomas Hegghammer of the Norwegian Defence Research Establishment recently found that most terrorists originating in the West (Europe, Australia, or the US) conduct their terrorism in conflict zones such as Iraq or Afghanistan. These terrorists are defined as “foreign fighters”. When these foreign fighter veterans return to the West, they are more likely to complete attacks, which are more likely to be lethal (American Political Science Review, volume 107, no. 1, Feb 2013, “Should I stay or should I go? Explaining variation in Western Jihadists’ choice between domestic and foreign fighting.”)

As the wars in Iraq and Afghanistan wind down, we can expect countervailing effects on terrorism in the West. On the one hand, there presumably will be less reason to conduct terrorism, as terrorists use these wars as justification for their actions. On the other hand, foreign fighter veterans will be returning to the West, increasing the quantity, militancy, and experience of the pool of potential domestic terrorists. New justifications for terrorism — for example Western intervention in Mali and Syria — can always be found by those so inclined.